Currently there is no room for hesitation as for the longer term direction. The Monthly bullish setup already triggered two weeks ago and mentioned on the past reviews has finally started to push the price up, gaining a new all time High.

Pay attention to the classic inverted Head & Shoulder pattern on the Monthly timeframe, created by this break out.

The passing week has started with a relatively big gap up. In such a case, of a gap with the trend, wait for the next thrust. If that thrust happens to be with the direction of the trend (in this case a HH, as happened last Thursday), then this gap should be considered to be a Run-Away gap, meaning that we should buy the break out with the trend. Indeed, the market has rapidly obtained the 1:1 target (and more than that), right on the next day.

The Monthly bullish setup (a Follow Through setup) points at 10040, but beware that the correct Stop for this setup is huge as well, below the Monthly swing Low, at 7893. In such cases, on the Daily, (and even on the Weekly) timeframe, it is more likely to see some big correction on the way up. Till that correction emerges, the attention on the Daily timeframe should be to take any pullback that ends as a clear sign of strength (e.g. Pinbar/Engulfing patterns) as an opportunity to join the trend, preferably if that happens after testing the 8 EMA short term sentiment line, on the way up.

The target of the above setup meets also a potential AB=CD patter (see chart). 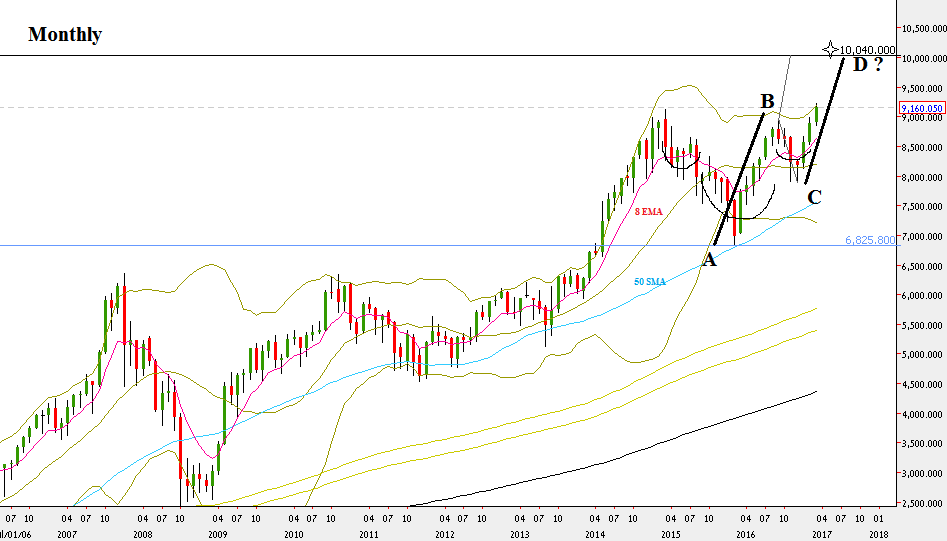 Nifty50, Monthly chart. The Inverted Head&Shoulders pattern is sketched. (at the courtesy of netdania.com)