The passing week was another Weekly inner bar, inner to the Weekly bar two weeks ago. Like most other stock markets, the Nifty50 kept consolidating in a relative small range.

The market has made an A-B-C correction down on the Daily timeframe. Although most of the week was rather bearish, nothing important has happened. The Daily bars didn’t even touch the lower Bollinger Band, and the Weekly (inner) bar got support on the (Weekly) 8 EMA short term sentiment line.

Currently, there is a Daily bearish setup to reach the 8476 level, right into an open gap (8476.9 till 8476.7). The stop is above the Daily swing High, at 8683.05. If this bearish setup does succeed, continuing down to close this open gap, there is a chance for another bearish wave to follow, this time to test a bigger open gap below (8323.2 till 8407.05), towards the 8398 level. Since the market stayed in the Weekly range, I wouldn’t give much chance for this scenario, unless we see the Low of Friday taken out right on the coming Monday, taking out the Weekly Low at 8540.05 within the same move.

On the other hand, testing the Weekly inner bar Low at 8547.55 without making a LL, while taking out the High of Friday at 8622.95 – if happens on the coming Monday (true for Monday only!) is a clear sign of strength that should drive the price back up to the 8685 level, at least.

As seen currently, I would give more chances for the buillsh side, meaning giving priority to join bullish setups rather than bearish setups, including the one mentioned above, although is already underway.

Closing this open gap (reaching the level of 8937.75) and/or reaching the all time High at 9119.2 – both can be triggers for a considerable monthly correction down. Bear in mind that since the market has taken out the 2 Month LHBL level, we still haven’t got yet any re-accumulation to get higher.

Here is the Daily chart with the important levels mentioned for the bearish side. The picture for the bullish side hasn’t been changed, please refer to it on the previous two reviews. 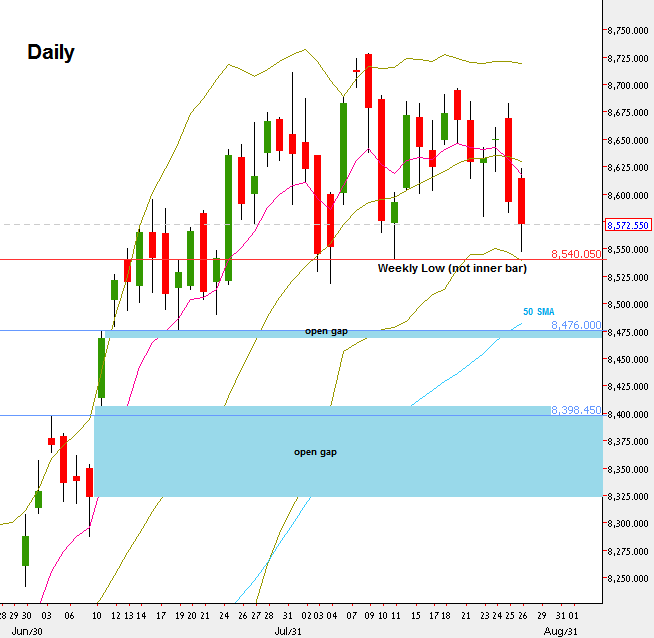 Nifty Futures, Daily chart (at the courtesy of netdania.com)