The bullish formation of a pinbar mentioned in the last review, has barely reached its target just before the Brexit news came and threw the price much below, deeply into the area of strong support.

Friday’s bar took out the Weekly low, and not surprisingly ended finally on the High of its daily range, since we are in an area of strong support (mentioned also last week). However, the fact that Friday’s bar looks bullish doesn’t necessarily mean so. There is an open gap from above, and the Daily bar is deeply sunk into the lower Bollinger Band, not so endearing view for the bulls.

The Weekly bar ended as a big range bar, closed in the middle. It calls for more sideways action with false thrusts on its edges.

Currently, there is a bearish setup to reach the level of 7850. Since it is an area of strong support, I wouldn’t recommend joining it, but only after true signs of weakness, such as the week starting with a daily gap down that doesn’t close, followed the next day by a LL. The correct SL for such a move is currently only above the Weekly high, so it is better to find smaller timeframe bearish signals to join instead, has the Daily timeframe shown signs of weakness.

On the other hand, if by the first day of the Week (and only the first day !) we get a Daily HH, it negates the bearish setup mentioned above. The stop in this case is below the Weekly Low, huge, so it is better to wait for a HL formation in order to join (a smaller move). The target shouldn’t be higher than closing the open Daily gap at the close of last Thursday, below the Weekly high. Taking out the Weekly high will be truly meaningful, but only later on.

Here is the Daily chart with the major support and resistance lines, maybe illustrating well the best chances for Weekly range sideways action, this coming week. 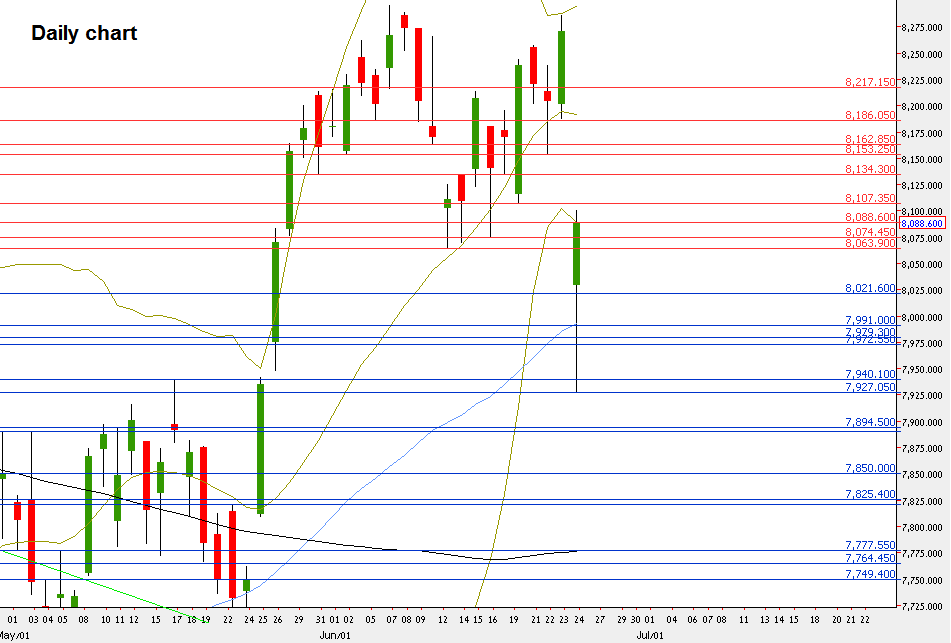 Nifty Futures, Daily chart, major support and resistance (by the courtesy of netdania.com)