The passing week was again a small range Weekly bar, just like the previous two. It started with a bearish open gap, but closed it right after two days. The price action of this instrument over the passing week showed once again the relative strength of this index compared to other stock indexes lately.

Currently the Daily timeframe is in a bullish setup, a bullish pinbar on a sloping 20 SMA (last Thursday), and has already been triggered by the thrust up made on last Friday. The target for this setup is of the same amplitude of the pinbar, which is to the 8286 level approximately, the High of the current Daily range, possibly confronting again the Monthly LHBL (Last High Before Low) at 8336.3. The Stop Loss for this setup is below the low of this pinbar, at 8074.45.

However, I wouldn’t recommend joining this setup now, even it has already been triggered, since there is a Daily open gap above. Best to let the market close the open gap first, then wait for a pullback, and join the move on good new signs of strength (sketched).

For the bearish side, only a thrust below the Weekly Low, currently 8063.9 Is a bearish setup to reach the support level at 7940. I would not give many chances for the bearish scenario, and in case the Weekly Low (the trigger) is taken out, there are much more chances to see false thrust down eventually. The area from levels 8002 down to 7764 is an area of strong support. 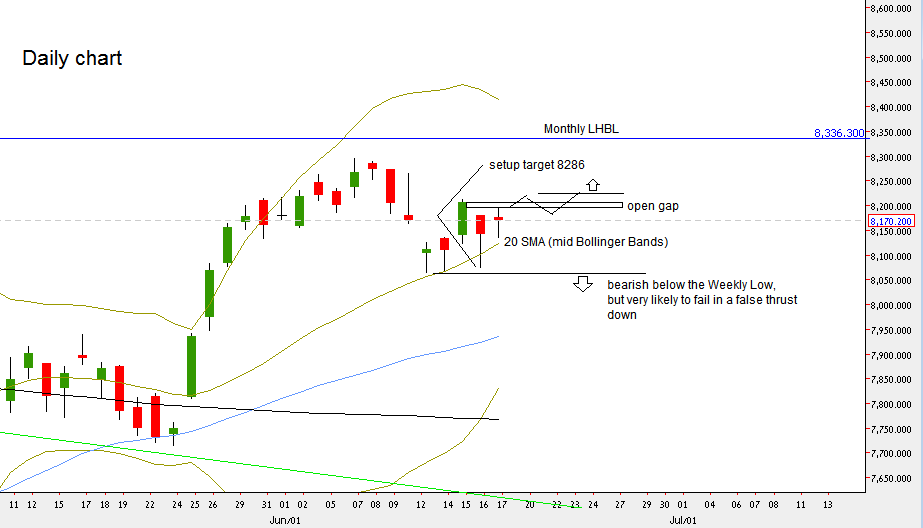 Nifty Futures: Daily chart (at the courtesy of netdania.com)