The passing week was a consolidation small range Weekly bar, as opposed to the previous week’s volatile price action.

The Nifty50 confronted the main resistance levels mentioned in the last review, and so far, didn’t break the higher one.

However, the fact that the consolidation took place on the high levels of the last price action is a sign of strength. The Low of the passing week is the first Monthly bar testing of the 20 SMA (mid Bollinger band).

Currently the most important level to take out for the bulls is the Monthly Last High Before Low (LHBL), at 8336.3.

Going down without first taking out the 8336.3 LHBL level, taking out the Weekly low at 8134.3 might start a bearish move of at least the same amplitude as of the passing Weekly bar, i.e. to the 8007 area. Further signs of weakness might bring it to the biggest support level around, at the 7980 area. Further support levels are all the way from 7980 down to 7900. Further signs of weakness can lead the market to a second test of the main down trendline from above, at the next major support level: 7600.

The pattern fans might discover an inverted Head & Shoulders pattern seen clearly on the Weekly chart. This pattern has already been triggered, with a target (the amplitude of the head) above the all time high! However, this is an example where the odds are not being with its followers, at least not for the moment, as the main Last high Before Low levels are still ahead of us (8336.3 and 8654.75). I wouldn’t recommend trading a bullish trade based on this pattern reason alone.  If it is truly bullish, the high of 8654.75 might be at a potential bigger left shoulder, so that only after a relative bigger right shoulder would be created and triggered, a better higher probability pattern might emerge. 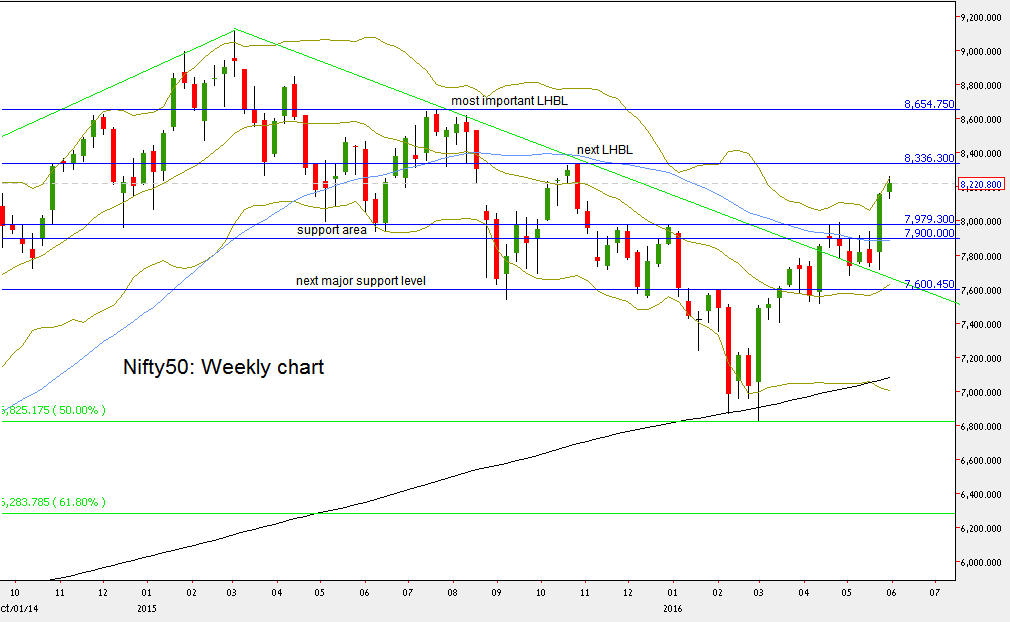