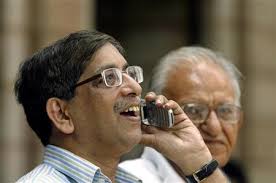 Markets have extended losses and are trading at day’s low weighed down financials and index heavyweight ITC and Infosys.

In the broader markets, BSE Midcap and Smallcap indices are outperforming the largecaps and are trading higher between 0.7-1.5%.

RIL, Tata Motors, Sesa Sterlite, GAIL and HUL are the top 5 gainers on the Sensex and are trading higher up to 3%.

Markets continue to trade firm for the second straight session buoyed by strength in Asian bourses and overnight rally on Wall Street. A smart rally in the energy stocks coupled with Infosys after CLSA raised its target price has lifted the benchmark indices higher.

However, foreign investors remained net sellers to the tune of Rs 240 crore in the cash market. RUPEE The rupee recovered by 10 paise to 62.57 against the US dollar in early trade at Interbank Foreign Exchange market today on fresh selling of the American currency by exporters.

Crude oil futures extended losses on Tuesday, as Iran and six world powers ramped up the pace of negotiations to reach a preliminary deal that could ease sanctions and allow more Iranian crude onto world markets.

Asian stocks rose across the board on Tuesday after a rally on Wall Street and steps by China to shore up its economy boosted risk appetite, while Greek debt worries again haunted the sagging euro.

The Shanghai Composite Index followed up Monday’s rally, rising to a fresh seven-year high on hopes for more infrastructure spending and monetary easing.

On the sectoral front, BSE Oil & Gas index is the top gainer followed by Metal, Healthcare and Consumer Durables indices trading higher up to 2%.

However, BSE Bankex index is the only loser down 0.3%. Oil and Gas stocks are surging in today’s trade with Reliance, ONGC and GAIL trading higher up to 2% on renewed buying interest.

The stock is the top gainer and is up 2%. The Shanghai Composite Index followed up Monday’s rally, rising to a fresh seven-year high on hopes for more infrastructure spending and monetary easing.

Tracking the news, metal shares are gaining in today’s trade. Sesa Sterlite, Hindalco, Tata Steel are higher up to 3%.

Leading private sector lenders ICICI Bank and HDFC Bank have cut rates by up to 0.25 per cent on high value fixed deposit on select maturities, a move that could be a precursor to lower lending rates.

The stocks are trading lower up to 0.3% Energy major ONGC has driven a hard bargain to renew its insurance and re-insurance covers, at USD 20 million — a discount of 35 per cent — for its offshore assets valued at USD 34 billion from state-run United India Insurance and two global re-insurers.

The stock is trading higher up to 1%. According to reports, GVK Power & Infrastructure is likely to file a draft prospectus for an up to Rs 1,500-crore initial public offer (IPO) of its airport unit soon.

The stock is up 20% in morning trade. State Bank of India, the country’s largest lender, said on Tuesday it had received approval for divestment of its stake in private life insurer SBI Life Insurance Co by up to 10%. The stock is trading with marginal gains.

Ever since the Union Budget levied hefty increase in excise duty on cigarettes, ITC’s stocks have been hampered affecting its core tobacco business and thus the company is thinking of separating its main business from other businesses.

The stock is down nearly 1%. Infosys has gained up to 0.7% after CLSA raises target to 2,800 rupees from 2,500 rupees and reiterates high-conviction “buy” rating.

NTPC on Monday forayed into hydroelectric generation by commissioning the 200 MW unit of its Koldam project in Himachal Pradesh. With this the total installed capacity of the company became 44,003 MW.

However, shrugging off the positive news the stock is down over 1%.

TD Power Systems has rallied 10% to Rs 377 on the National Stock Exchange (NSE) after the company said that it has received order from Diesel Locomotive Works to supply 10 traction alternators. Ashok Leyland has divested its entire stake in its Czech Republic subsidiary, Avia Ashok Leyland.

The company made a cash realisation of $ 10.96 million through this stake sale.

The stake sale was a part of its restructuring plan.

The stock is up nearly 1%. NMDC has started the trial production of its new project Bailadila Iron Ore Deposit 11B located in Bailadila region in Dantewada in the state of Chhattisgarh.

This project has iron ore production capacity of 7 million tonnes per annum.

The market breadth is firm on the BSE with 1,360 advances and 596 declines.